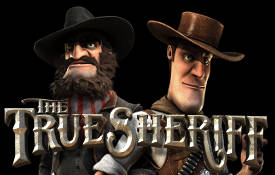 There’s a new sheriff in High Noon and he means business. Betsoft Gaming released its latest Wild West themed 3D video slots titled, The True Sheriff. It has 5 reels, 30 paylines and offers a non-progressive jackpot payout of $15,000. The New Sheriff features the usual Wilds, Scatters and Free Spins. Of particular interest is the Shootout Bonus Game.

The images that flash across the reels are The Sheriff’s Badge, Revolver, The Villain, Lady and Cowboys. Numerals from 10 to Ace appear across the reels too. When you hit a winning combination the Sheriff becomes animated.

The True Sheriff offers you a myriad of betting options and customization features. The audio is reminiscent of the Wild West movies of yesteryear, you can even hear a coyote hollering in the background.

Enough talk let’s play the game. You can decrease the amount of paylines by clicking on the plus/minus buttons in the left-hand corner of your screen. The coin denomination starts off with $0.02 up to $0.50 per spin. The minimum amount that can be wagered per spin is $0.02 and the max amount is $75. It goes without saying that the game is suitable to both penny pinchers and high rollers.

In the top right-hand corner of the game screen you’ll see ”Options” and ”View Pays”. The latter is the Game Settings options. Here you can set the game speed, graphics, audio and so forth. When you click on the View Pays it indicates the game’s characters and how much they pay. An Auto Play feature enables you to spin the reels a certain amount of times. 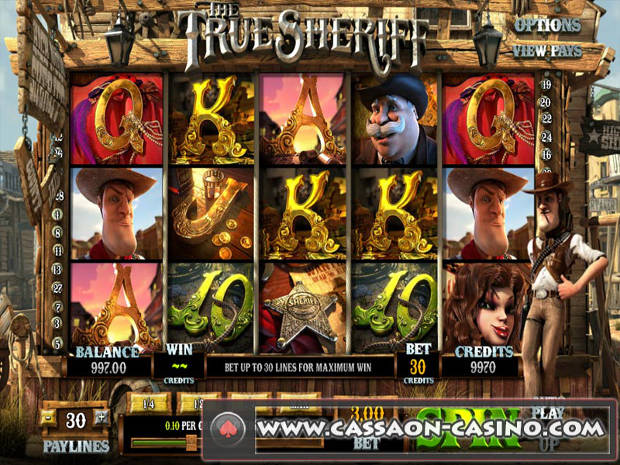 When the Gun symbol appears on the centre reel it triggers the special Wild Guns Feature. The Sheriff becomes animated, draws his gun and shoots up to 5 symbols on the reels. These symbols become Wild causing instant re-spins.

The Showdown Bonus (Bonus Round)

This is where the big money’s at. The Showdown Bonus is triggered when the Sheriff appears on the first reel and the Villain on the fifth reel. Three gun icons must also appear on active pay lines across reels 2, 3 and 4.

Whilst the bonus round is active you must predict the outcome of each coin toss. For every coin toss correctly predicted additional prizes will be won. An incorrect guess however will translate into a loss of funds. Every win during the bonus round will take you one step closer to the grand prize.

After each winning combination you have the option of doubling up. Scatter payouts and a free spin mode are awarded when 3 or more Sheriff’s Badges appear on consecutive reels. You can receive anything from 10 to 15 free spins, however, this depends on the amount of Sheriff’s badges that activated this feature. Additional free spins cannot be won during the free spins mode.

We recommend you play The True Sheriff at these Casinos.