In this article I’m going to focus on the return percentages of new video poker games such as One-Eyed Jacks, Jacks or Better and Fives Aces.

What Are The Odds?

Numerous books have been written on video poker and some of them barely scratch the surface. Each game comes with a myriad of paytables and different strategies. To a certain extend it can be a bit confusing at times especially if one takes into account the cashback, promotions and trying to establish which games offers you more bang for your buck.

On electronic games such as slots machines and video poker, the odds are measured by return percentage. The return percentage on most games account for less than 100 percent-this is how the casinos make their money. In some video poker games the return can be more than 100%, in layman’s terms it simply means that a skilled player has an edge over the house.

Bear in mind only highly skilled players can accomplish this. The most important decision you’re ever going to make in video poker is which game to play. This is why the paytable plays such an integral role irrespective of your level of skill. Contrary to popular myth, as in any live game the cards in video poker games are dealt fairly and randomly. However, some discrepancies might occur especially if a third-rate manufacturer provides machines for small markets and foreign countries which lack proper regulation.

History Of The Game

Before I continue with the different variations of video poker and their payout percentages I’d like to give you a brief history of the game first. The prohibition of the 1920’s was responsible for poker becoming a house-based game. With the closing of drinking and gaming venues private games became the mainstay of American culture. The kitchen table became the venue where family and friends gathered to play. The playing of private games resulted in many variants of poker each with its own rules.

When gambling became legalized in Nevada in the 1930s, draw poker was introduced to Las Vegas casinos. In 1970, Benny Binion, owner of the Horseshoe Casino in Las Vegas, decided to hold a poker tournament where local and international players could compete against each other. This tournament was called the World Series of Poker (WSOP).

Since the 1800s poker has been played on gaming machines. In 1891 the first poker card machines were manufactured by Sittman and Pitt of Brooklyn. These games became so popular that they were installed in licensed liquor stores across Brooklyn. At the time they numbered just over 3000. By 1901 these machines were redesigned so that draw poker could be played.

In the mid-1970s video poker was invented. In 1976 the first black and white video poker machines saw the light of day, eight months later the color version appeared. Today, video poker is one of the most popular games found on the casino floor in land casinos and played online.

Before you start playing, you must work out the amount of cash you wish to wager. Once you’ve decided on a budget, stick to it and don’t go over it. Recalculate it if your personal circumstances change.When you decide to play don’t immediately change all your money into chips. Instead, rather change it to small amounts. If you keep digging into your wallet, you will have a better take on how much money you’re losing as you’ll be watching real money diminish rather than chips.

Games played online are played at a much faster pace than traditional games hence it’s easier to lose money at a much faster rate. Placing a bet does not involve the handling of chips. You simply click on your computer mouse. Often there is a time limit placed on how long you have to make a decision. The decisions will be made in a matter of seconds, this does not give you much time to ponder your next move. The moment one game ends the next one starts.

Don’t aim to high, even if your budget allows it to play more expensive games. Stick to the cheaper games, as your skill level improves you can start increasing your bets. Keep a record of the amount of cash you’ve wagered and the games you’ve played in a small notebook. Most players tend to remember the big wins and forget the losses. Analyze the results and learn from your mistakes.

If you’ve lost, try to determine why. Were you staying in when you should have folded? Were you folding with hands that could have won? If you’re a disciplined player chances are pretty good that you will be successful video poker player. When you see your cards on the screen, try and memorize the hand you have.

Before you place a bet, make sure you understand your chances of winning. Periodically analyze your records. They will tell you if you’re sticking to your budget and if your betting strategy is paying off. Detailed records will indicate if you have any weaknesses. As such it allows you to alter your strategy to compensate.

*The above table indicates the expected return for Jacks or Better

In this variant of video poker the jacks of hearts and spades are optionally wild cards. The emphasis is on ”optionally” because if the player lands a royal flush in hearts or spades, it pays as a natural royal. Most players are still not sure how this hand pays out. For the sake of clarity please have a look at the payout ratio of the below table. 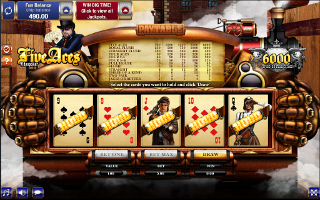 *The table below indicates the expected return percentage for Five Aces

Be careful when you play multi-play video poker like Triple Play and Five Play. Given the same paytable, the odds per hand are the same as in single-line and can be a plus. As a general rule, the paytables are not as good as that of multi-play games. This specifically applies to 50 play and 100 play games.

The downside to optimal strategy in video poker is that it’s rather complicated. The good news is that simplified strategies are just as powerful and losses due to inaccuracy cost 0.1%, maybe less. If you’re serious about playing video poker, you must have strategy cards for the most common variants. In stark contrast to slots machine play, in video poker you must always bet the maximum number of coins. Why? If you manage to hit a royal flush you’ll receive the maximum payout.

If you’re an avid player of slots I suggest you switch over to video poker. The rewards are well worth it although it is more work. Also, when playing video poker it’s quite easy to get a return of 99.5%. With some extra work, it is one of the few casino games where the return of over 100% could be achieved.