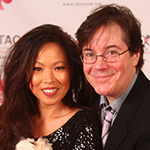 Michelle Lau is a professional poker player and also co-founded FIDPA, Federation Internationale de Poker Association, with Marcel Luske “The Flying Dutchman,” to unite the poker industry & to ensure the game is played with fairness. She is also the author of “The International Poker Rules” a standard set of fully modifiable tournament poker rules that is currently used in card rooms around the world.

In addition to being a former Real Estate Broker, a recent MBA graduate of George Washington University, School of Business, Michelle also holds a Nevada Gaming License and is an Independent Casino Host in Las Vegas. She currently works as an independent consultant for the gaming industry and is part of The Nova Group, the leading resource for celebrity appearances and placement for casino marketing events. She has an extensive knowledge of business development, branding and positioning, within the gaming industry and provides the industry with an accurate and current look on player acquisition, player retention and brand penetration, among today’s casino player, as well as the best utilization of celebrity for their business and events.

Michelle has numerous final table appearances and victories throughout the US and Europe, and has played and taught many of the world’s hottest celebrities and top athletes. She can often be found laughing, joking and playing poker with some of the world’s greatest poker players, professional athletes and some of Hollywood’s most elite.

She spends much of her free time being actively involved with various charity organizations including TACA (Talking About Curing Autism), Starkey Hearing Foundation and many other local, national and international causes that promote a better life.

You’re regarded by many as one of the top female poker players and known for making male players ”weep”. What prompted you to become a professional poker player?

I love poker and I am really competitive. Poker is the one activity that allows me to compete fairly against men and women, of all ages and sizes. I love to strategize, the game of poker is all about making the right decisions, knowing and playing by the rules, having fun and making money.

The sport of poker, especially tournaments, is all about endurance, position, money management and getting results. When I started playing poker professionally, the poker world was very different, it was filled with opportunity, challenges and there was a sense of community. Today, the poker world is so different, the players are different and the legal landscape in the US is extremely different.

Professional poker is still pretty much dominated by men. Do you think the gap is closing between male and female players? Are male players more aggressive than female players? If so, why would you say so?

Women are typically only 3% of the field, although the number of entrants in the Ladies events are growing each year. I don’t know if I would say that male players are more aggressive, I’ve played against some very aggressive women players, but I will say that for myself, women are harder to read than male players at a poker table.

Poker is a game of skill. When playing in a tournament, do you follow a specific strategy? Has it stood you in good stead so far?

Tournaments are all about survival. Typically, when I play a tournament, I set goals for each level. I know that a tournament can’t be won in the early levels of play. Like in life, it’s the small steps that lead to the bigger picture and most time requires positive thinking, a defined goal and persistence. Knowing your competition, taking advantage of your position, along with some calculated risk taking are elements that have contributed to my success. So far, so good, I am a very goal orientated, so this strategy has worked well for me, at and away from the poker table.

What’s the best hand you ever had and which famous poker player did you knock out with it? Being a female poker player does it hold a certain advantage?

Believe it or not, I rarely remember actual hands, but I know I’ve knocked out many famous poker players over the years. At a poker table, I play my game no matter who the opponent is. Being a female poker player can have its advantages, but can also have disadvantages. I usually take notice of my male opponents and typically categorize them into 3 categories.

Bad beats are part of the game, what’s the worst bad beat you ever experienced?

Bad Beats are definitely part of the game, although what most people don’t realize is that it is only a bad beat because you played your hand and opponent correctly and just got unlucky. Bad beats happen, its part of the game and like all poker players, I’ve experienced brutal bad beats, but never let it get me down. I just take it as they come and try to take away any lesson I can from them.

You’ve rubbed shoulders with the rich and famous. Which celebrity/ies who play poker made a lasting impression upon you?

I have played poker with some of the most famous athletes and celebrities, mostly at charity events to raise money for amazing organizations. I’ve played with Michael Jordan, the greatest basketball player of all time, a few times. He is a great guy and super competitive, which I just love. He always handles himself with confidence, respect for others and with the greatest display of sportsmanship.

In your expert opinion, what’s the biggest mistake aspiring poker players normally make and what advice would you give to them?

It’s funny, people think playing poker professionally is so glamorous and exciting. The best advice I can give any aspiring poker player, is that if you are contemplating going to college or playing poker professionally, I always recommend that they go to school. Poker will be there when they are done. I also always advise players to never stop learning, about yourself, the game and how to manage your bank roll. I believe this is the best investments you can make for the future.

I see that you’re involved in several charities? One that comes to mind is the ”Ante Up for Autism” with actor Joseph Reitman tell us more about it?

TACA or Talking About Autism, www.tacanow.org is one of my favorite non-profit organization because they provide real help, free services and hope for families who have just received the autism diagnosis. TACA speeds up the cycle time from the diagnosis to effective treatments, leading to a better quality of life for people affected by autism.

Today, 1 in every 68 children are being diagnosed with autism, that is more than 2 million people living with autism, just in the U.S. Every 20 minutes a parent is being told their child has autism. I’ve been involved with TACA for the last 8 years and a few years ago, I invited Joe Reitman to Ante Up for Autism, and he’s been such a great supporter and friend to me and to TACA.

Internet gambling is huge in the United States. Have you ever played online poker? Would you say there’s a difference between live poker and playing it online?

Unfortunately, poker in the US is not like it was before Black Friday. I love playing poker, whether it’s online or live, although I do prefer live play, for the social, face to face interactions. Playing online is great, it’s fun and a great way to sharpen your poker skills, but there is nothing greater than playing live and see who your opponent is. Playing live takes the game to another dimension, when playing online, you have no idea who you are playing against.

If I may ask, what’s the vibe amongst female poker players? Do you look up to certain female players? If so, who and why?

I believe a player is a player, just like celebrities are people. I try to respect everyone as a person, regardless of social status, gender or age. I certainly believe that there are great players at every table, live and online, and I do observe them, their bet size, their actions, their position as well as their character and how they treat others. To me respect is given to those who deserve it, as opposed to those who demand or require it.

Poker players get up to all kinds of antics. What’s the funniest thing that ever happened to you or that you experienced during a poker tournament? What’s your favorite tournament and why?

There are so many great and funny moments that I have experienced, at and away from the poker table. Back in the day, we would travel from tournament to tournament and have fun dinners, play satellites and cash games and just hang out. I love playing the Master Classics in Amsterdam at the Holland Casino, EPT events are always well organized, WPT events are great, especially at Bellagio and I enjoy the Deep Stack events at the Venetian. Poker is a great game and has brought lots of laughter, life lessons and friendships into my life.