In this article I’m going to discuss why Double Double Bonus poker is a great game. How to play multi-line games and why some hybrid games are simply too expensive to play.

The most popular video poker variant is hands down Double Double Bonus Poker. With its mini-jackpot concept where aces with a kicker pays 2,000 coins, this game became a hit with players overnight.

Compared to other games in the casino it offers more winning chances. Although many players are playing it, only a handful of them employ the correct strategy. The regular poker draw of this game has a few plays that differs from the standard game. I might add it can be feast or famine and is more expensive to play.

Truth be told Double Double Bonus Poker is a different beast altogether. Reason being it only returns even money for two pair with the addition of kickers and differences around aces that don’t come into play on most other video poker variants. It only returns an equal amount of coins bet for two pair instead of double the bet like in Bonus Poker or Jacks or Better. As such it increases the volatility of the game significantly.

Before You Play Consider The Following: 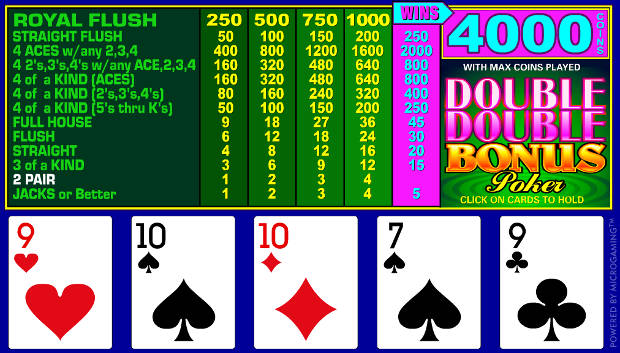 Can You Win The Royal Flush Without The Suited Ten?

Video poker ace Bob Dancer says, ”Sometimes it’s better to be a gambler and sometimes it’s not better to be a gambler.” On this hand he says it’s in your best interest not to be a gambler. Seasoned players are of the opinion that holding the ten incurs a bigger loss of expected value on the hand since your chances are better to land four aces than a royal flush. Just a word of caution though, many players focus only on winning the aces with a kicker and forget the real aim of video poker which is to win the royal flush.

The name of the game is derived from the return on its four of a kind. Every single four of a kind pays double as opposed to the same four of a kind in Bonus Poker. Four aces pays out 800 coins, four twos, threes or fours pays out 400 coins. For four fives through to four kings 250 coins each are paid out.

In principle it reduces double money on two pair and pays only even money. This raises the volatility of the game over Bonus Poker, but it also increases the payout on four of a kind. This is why most players regard it as a trade-off of sorts. Another reason why Double Bonus Poker is a good choice it pays more on the full house/flush than Double Double Bonus Poker. If you have a limited bankroll not only does it extend your game play but offers loads of entertainment too. 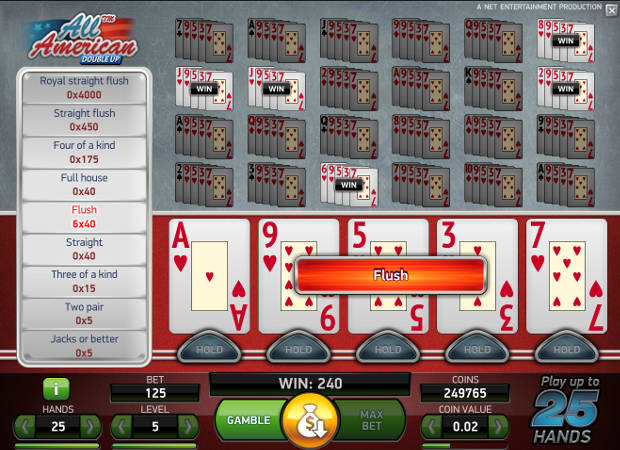 The standard multi-line games that could be played online are easy and offer regular payouts. If you’re interested in playing them, click on Bet Max and only the bottom line cards will be dealt. Pick your hole cards from the bottom-line hand. When you click on draw, each line will finish the hand from the random number generator. Therefore, each separate hand can be a potential winning or a losing hand based on the hold cards you’ve picked.

What To Do When Choosing Multi-line Machines

Multi-line games are popular. They allow you to choose the denomination, the type of game and how many lines (three, five or ten). These games have higher multiples, like fifty or one hundred lines which allow you to play for nickles or dimes. The simple reason for this is that most players can’t afford it to play $300 per hand.

The cost of each hand played on these machines will be the number of max bet coins multiplied by the number of lines you selected. Therefore, if you’ve wagered ten-line nickles whose max bet is five coins it will cost you twenty-five cents per line times ten lines or $2.50 per hand. Each multi-line game has its own deck of cards. If you pick a five-line game, you’ll be betting on hands produced with five different decks of cards. 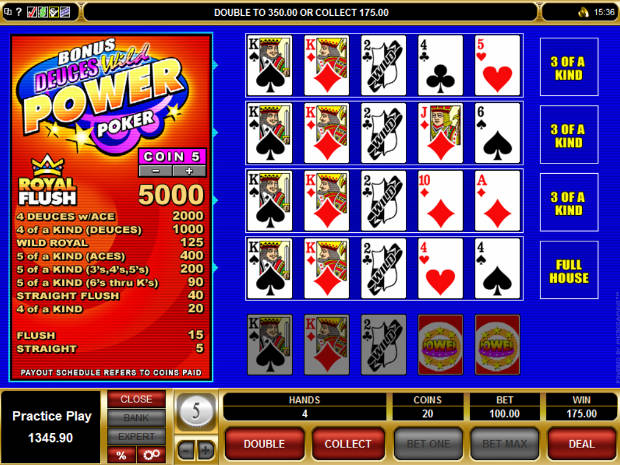 Why Hybrid Video Poker Games Are Expensive To Play

If you want a change of pace and have some cash to burn, you can give these costly games a go. In this section I’m going to give a brief overview of the different kinds of hybrid games.

This game is a multi-line video poker game with a reel slot variation that will set you back an extra coin per line. If you’re playing ten lines, instead of the usual fifty coin max bet, it will cost you 60 coins. Only play the game if you want a break from your usual game play. Also, the odds in this game are heavily stacked against you.

This is another game that offers a combo. It works like a digital video reel slot machine, except one poker hand comes up on the initial bet. The player picks the hold cards which determines all the line combinations after the Draw Button is clicked. When the spin button stops, poker hands are produced on nine lines to make up winning or losing hands, instead of rows of sevens or double diamonds like in traditional slots machines. I must point out that this video poker variant eats a lot of coins.

This is one of the most challenging games by a long shot. Only play this video poker variant if you’re prepared to learn the unique strategies for each line. For each line of play, each bet is twenty coins and five coins. You may not get the chance to play all four lines, even though the cost to play remains the same as if all four lines were being played. The major challenge about this game is that there’s a different strategy for each of the four lines of play.

Each video poker machine comes with its own playing strategy and paytable. Before you play a game make sure you understand its strategy and the odds of each hand. Avoid playing Jacks or Better unless you can find a machine that offers a payout of 9/6 in the denomination of play. Although multi-line games are more exciting to play they are quite risky. The most popular video poker variant in the United States is Double Double Bonus Poker since it predominantly favors the savvy player.

2. Games And Casino- Tips and Strategy